A Narrow Escape: From Street Life, Abuse and Sex Trafficking to Family Life in the Suburbs 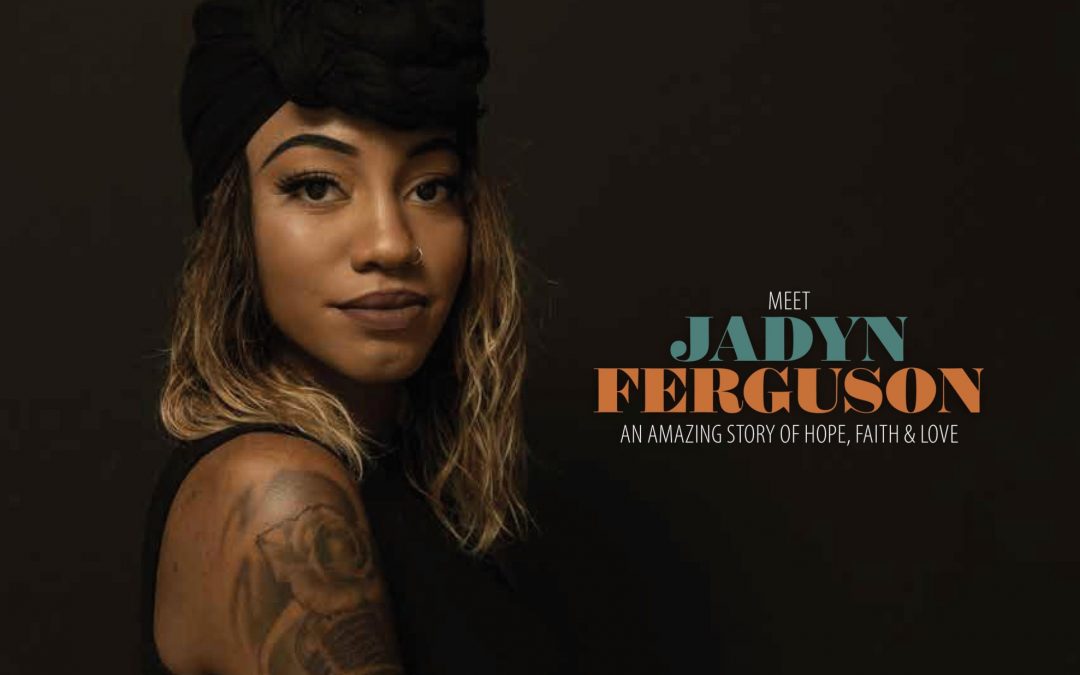 This article was originally published a few years ago in Las Sendas Life Magazine, a local magazine for our neighborhood in Northeast Mesa, AZ. At the time, I knew it deserved a much larger audience, but life flies by and my blog was nothing more than a half-baked idea at the time.

I will probably post an update on this amazing family sometime soon, but in the meantime, I wanted to at least get this story up on my blog. Better late than never!

It’s a story about love, triumph over the hard things, and silver linings…my favorite kind of story! 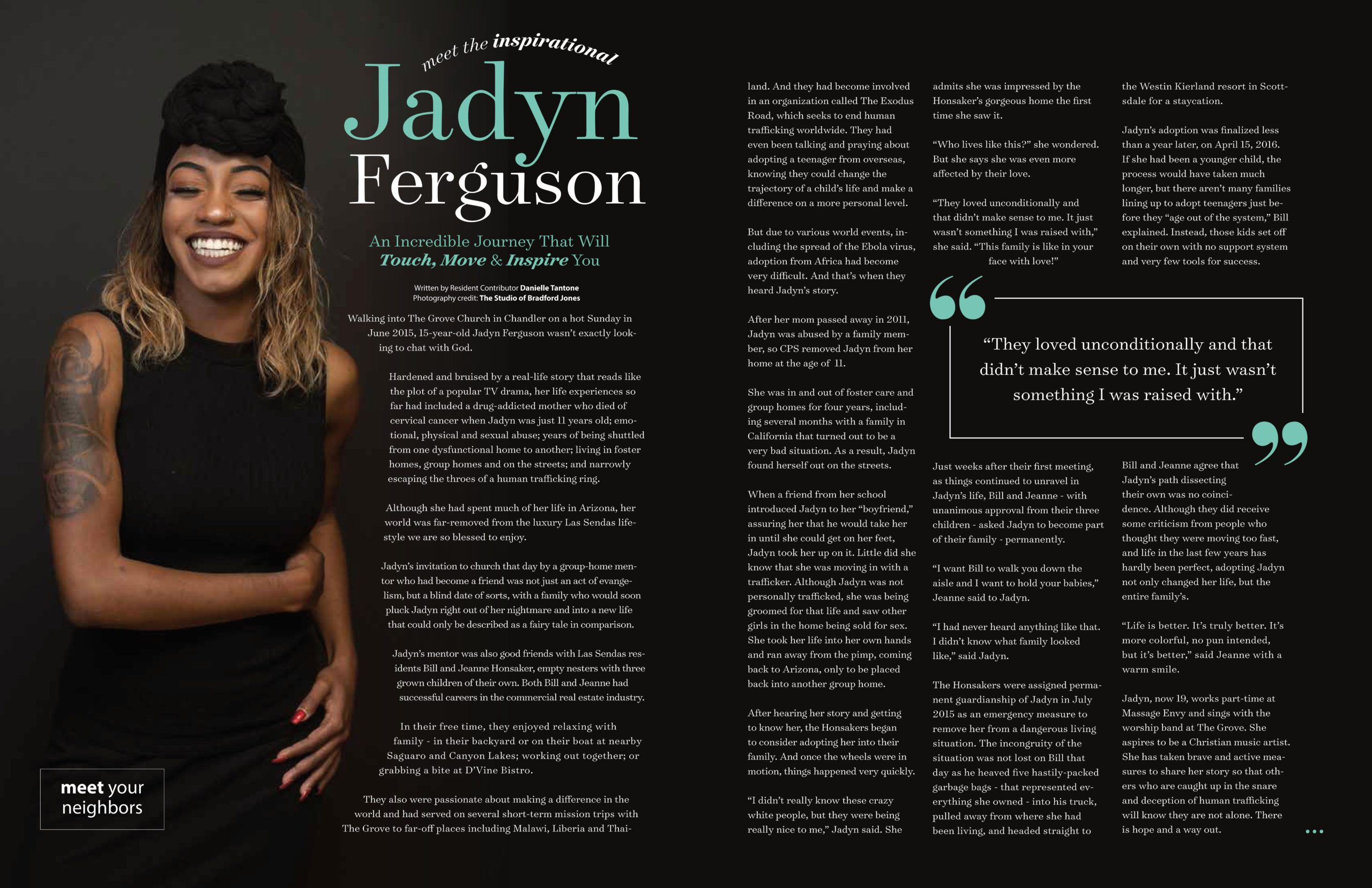 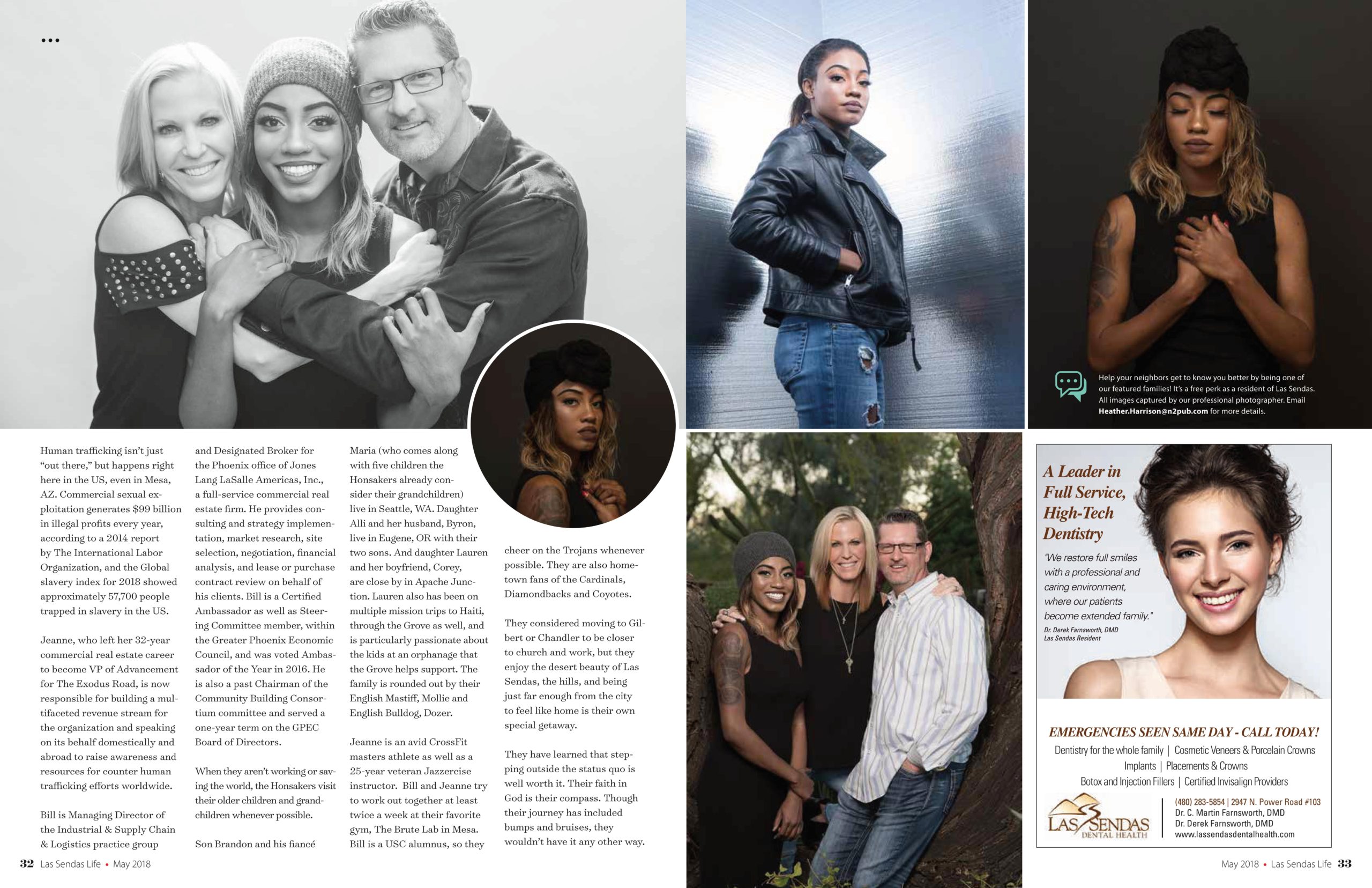 Walking into The Grove Church in Chandler on a hot Sunday in June 2015, 15-year-old Jadyn Ferguson wasn’t exactly looking to chat with God.

Hardened and bruised by a real-life story that reads like the plot of a popular TV drama, her life experiences so far had included a drug-addicted mother who died of cervical cancer when Jadyn was just 11 years old; emotional, physical and sexual abuse; years of being shuttled from one dysfunctional home to another; living in foster homes, group homes and on the streets; and narrowly escaping the throes of a human trafficking ring.

Although she had spent much of her life in Arizona, her world was pretty far-removed from the luxury Las Sendas Lifestyle we are so blessed to enjoy.

Jadyn’s invitation to church that day by a group-home mentor who had become a friend was not just an act of evangelism, but a blind date of sorts, with a family who would soon pluck Jadyn right out of her nightmare and into a new life that could only be described as a fairy tale in comparison.

Jadyn’s mentor was also good friends with Las Sendas residents Bill and Jeanne Honsaker, empty nesters with three grown children of their own. Both Bill and Jeanne had successful careers in the commercial real estate industry.

In their free time, they enjoyed relaxing with family – in their backyard or on their boat at nearby Saguaro and Canyon Lakes; working out together; or grabbing a bite at D’Vine Bistro.

They also were passionate about making a difference in the world.

They had served on several short-term mission trips with The Grove – to far-off places including Malawi, Liberia and Thailand.

And they had become involved in an organization called The Exodus Road, which seeks to end human trafficking worldwide.

They had even been talking and praying about adopting a teenager from overseas, knowing they could change the trajectory of a child’s life and make a difference on a more personal level.

But due to various world events, including the spread of the Ebola virus, adoption from Africa had become very difficult.

And that’s when they heard Jadyn’s story:

After her mom passed away in 2011, Jadyn was abused by a family member, so CPS removed Jadyn from her home at the age 11.

She was in and out of foster care and group homes for four years, including several months with a family in California that turned out to be a very bad situation. As a result, Jadyn found herself out on the streets.

When a friend from her school introduced Jadyn to her “boyfriend,” assuring her that he would take her in until she could get on her feet, Jadyn took her up on it. Little did she know that she was moving in with a sex trafficker. Although Jadyn was not personally trafficked, she was being groomed for that life and saw other girls in the home being sold for sex. She took her life into her own hands and ran away from
the pimp, coming back to Arizona, only to be placed back into another group home.

After hearing her story and getting to know her, the Honsakers began to consider adopting her into their family. And once the wheels were in motion, things happened very quickly.

“I didn’t really know these crazy white people, but they were being really nice to me,” Jadyn said.

She admits she was impressed by the Honsakers’ gorgeous home the first time she saw it.

But she says she was even more affected by their love.

“They loved unconditionally and that didn’t make sense to me. It just wasn’t something I was raised
with,” she said. “This family is like in your face with love!”

Just weeks after their first meeting, as things continued to unravel in Jadyn’s life, Bill and Jeanne – with unanimous approval from their three children – asked Jadyn to become part of their family – permanently.

“I want Bill to walk you down the aisle and I want to hold your babies,” Jeanne said to Jadyn.

The Honsakers were assigned permanent guardianship of Jadyn in July 2015 as an emergency measure to remove her from a dangerous living situation.

The incongruity of the situation was not lost on Bill that day as he heaved five hastily-packed garbage bags – that represented everything she owned – into his truck, pulled away from where she had been living, and headed straight to the Westin Kierland resort in Scottsdale for a staycation.

Jadyn’s adoption was finalized less than a year later, on April 15, 2016. If she had been a younger child, the process would have taken much longer, but there aren’t many families lining up to adopt teenagers just before they “age out of the system,” Bill explained. Instead those kids set off on their own with no support system and very few tools for success.

Bill and Jeanne agree that Jadyn’s path dissecting their own was no coincidence.

Although they did receive some criticism from people who thought they were moving too fast, and life in the last few years has hardly been perfect, adopting Jadyn not only changed her life, but the entire family’s.

Jadyn, now 19, works part-time at Massage Envy and sings with the worship band at The Grove. She aspires to be a Christian music artist.

She has taken brave and active measures to share her story so that others who are caught up in the snare and deception of human trafficking will know they are not alone. There is hope and a way out.

Human trafficking isn’t just “out there,” but happens right here in the US, even in Mesa, AZ. Commercial sexual exploitation generates $99 billion in illegal profits every year, according to a 2014 report by The International Labor Organization, and the Global slavery index for 2018 showed approximately 57,700 people trapped in slavery in the US.

Jeanne, who left her 32-year commercial real estate career to become VP of Advancement for The Exodus Road, is now responsible for building a multifaceted revenue stream for the organization and speaking on its behalf domestically and abroad to raise awareness and resources for counter human trafficking efforts worldwide.

Bill is a Certified Ambassador as well as Steering Committee member, within the Greater Phoenix Economic Council, and was voted Ambassador of the Year in 2016. He is also a past Chairman of the Community Building Consortium committee and served a one-year term on the GPEC Board of Directors.

When they aren’t working or saving the world, the Honsakers visit their older children and grandchildren whenever possible.

Son Brandon and his fiancé Maria (who comes along with five children the Honsakers already consider their grandchildren) live in Seattle, WA. Daughter Alli and her husband, Byron, live in Eugene, OR with their two sons. And daughter Lauren and her boyfriend, Corey, are close by in Apache Junction.

Lauren also has been on multiple mission trips to Haiti through the Grove as well, and is particularly passionate
about the kids at an orphanage that the Grove helps support.

The family is rounded out by their English Mastiff, Mollie and English Bulldog, Dozer.

Jeanne is an avid CrossFit masters athlete as well as a 25-year veteran Jazzercise instructor. Bill and Jeanne try to work out together at least twice a week at their favorite gym, The Brute Lab in Mesa.

Bill is a USC alumni, so they cheer on the Trojans whenever possible. They are also hometown fans of the
Cardinals, Diamondbacks and Coyotes.

They considered moving to Gilbert or Chandler to be closer to church and work, but they enjoy the desert beauty of Las Sendas, the hills, and being just far enough from the city to feel like home is their own special getaway.

They have learned that stepping outside the status quo is well worth it. Their faith in God is their compass. Though their journey has included bumps and bruises, they wouldn’t have it any other way.