Flying Inspiration: Southwest Airlines Pilot Retires but Plans to Continue Rocking for Many Years to Come 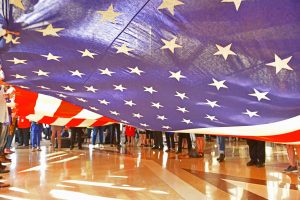 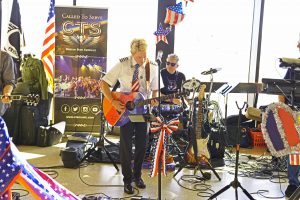 The stage was set in front of the enormous windows at the end of what is normally just a hallway full of people rushing to their flights. But on November 7, the day after the midterm election and a few days before Veteran’s Day, hundreds of people – including many fellow Las Sendas residents – gathered inside Phoenix Sky Harbor’s Terminal 4 to celebrate Jeff Senour’s life and work, many dressed in military uniforms or our country’s red, white and blue, and holding American flags.

When the plane touched down after Captain Jeff Senour’s final flight as a Southwest Airlines pilot, people rushed toward windows to catch a glimpse of him coming into the gate.

After a touching water salute, which involved two Phoenix firefighting rigs that sprayed arcs of water over the arriving flight, Jeff leaned his torso out of the cockpit’s window for a big wave. The water salute is a sign of respect, honor and gratitude and is a common practice when a captain retires. But the rest of the fanfare and festivities was pure Jeff. He had filled that terminal with rocking inspirational music, heroes, employees, patriots and friends because his life’s mission is to inspire others to live their dreams.

“The honor of bringing hundreds of people together under one roof to celebrate life, happiness and dreams is something this world needs more of,” he said.

Although the tributes and inspirational words people shared about Jeff reminded me of the kinds of things people usually only say after someone has died, this was by no means a funeral. It was one part retirement party – celebrating Jeff’s retirement from Southwest Airlines after 25 years of service; one part birthday party – celebrating Jeff’s 65thbirthday, which precipitated the retirement (Yes, you read that right, 65! Though if you met Jeff around town, you’d think he was maybe 50); and one part rock concert – when Jeff is not flying planes across the USA, he and his band, CTS – Called to Serve – play inspirational and patriotic rock music all over, from the Pentagon to Pearl Harbor and everywhere in between. The recipe blended together to create one rocking patriotic celebration – complete with real American heroes and a giant American flag that stretched across the terminal.

Among Jeff’s more famous friends celebrating that day were Emmy-nominated actor Jack Scalia and Valerie Thompson, the world’s fastest female motorcycle racer. Also along for the ride were New York Fire Department Lieutenant Joe Torrillo – who survived being buried under debris on 9/11 in the World Trade Center, and has become an inspirational public speaker; and Mitch Mendler from the San Diego fire department – along with a special passenger, the 30×60 foot Patriot Flag, currently touring the country visiting every US State Capital. We got to spread the enormous flag across the terminal and wave it up and down as rock music wafted through the air. The flag was the larger of two giant flags transported on Jeff’s final flight. The smaller flag came from the USS Missouri, a battleship at Pearl Harbor in WWII. Jeff was also honored to transport several Congressional Medals of Honor in the cockpit with him. There were plenty of regular people celebrating on the flight and in the terminal too: fellow employees, family, friends and neighbors.

“It’s hard to describe the contrast between his calm, mature and professional demeanor and the giddiness, joy and passion that he had that whole day, and that I can only imagine was in every flight he took,” said fellow Las Sendas resident Michael Tantone, who had the opportunity to fly on the celebratory flights with Jeff to Burbank, CA and back home again to Phoenix.  “Jeff has a way of making you feel like you are the most important person he’s ever talked to, even as you are aware that he’s talked to some of the most amazing people in the world. He travels with celebrities, heroes and political figures, yet he remains a humble regular guy. He was so honored and touched by all the people there, and we were honored and touched to be there,” Michael said.

“My mom taught me that no matter what job you do, do it well,” Jeff said. “You never know who’s going to notice. Go that extra mile, whether sweeping the floor or whatever.”

Jeff said his dad was a private pilot and his mom was a musician, and he’s been blessed to be able to combine the two dreams.

“Along the way there were stumbling blocks and hurdles,” he said.  “You don’t get a trophy in life for everything. The sooner you can learn to fail, the sooner you will learn to succeed. Failure teaches us how to pick ourselves up, move on and be better.”

Jeff said his dad took him flying as a kid and he was hooked, but having little money for flight lessons, he had to learn one slow step at a time. A good friend of his in college was a flight instructor, so each time he’d saved up enough money, he would go up and fly for an hour. Eventually Jeff became a flight instructor at Van Nuys airport. From there he moved on to  flying jets, which led to flying celebrities, CEOs and movie stars around the world. He was even inducted into the Screen Actors’ Guild and became a Hollywood screen pilot, working on many movies – including True Lies, Executive Decisions, Hot Shots, and Silence of the Lambs; TV shows such as Fall Guy and Knight Rider, and airline commercials.

But he said the job at Southwest was also a dream: the caliber of people spectacular, the culture refreshing, and just an overall amazing experience he has loved every minute of. Although he’s officially aged out of commercial passenger flying, he’s not ready to give up flying just yet. He can still fly corporate and charter flights and is also working on some other projects, including two different television series and his band CTS, which he started about 15 years ago to write and bring original music to the forefront.

“Find the gift inside of you that God gave you and go do something with it to make the world a better place.” He said.  “There are 7 Billion people on earth and no two of us are exactly alike. Find your gift and use it for good.”

Jeff said he met his wife Allison here in Las Sendas after he purchased her house. He hadn’t realized the house was “For Sale WITH Owner,” and in fact they didn’t meet until about three weeks after the sale, when he opened the door one day, his then 5-year-old son Parker standing next to him, and saw this beautiful woman standing there. She had only stopped by to welcome him to the neighborhood, but they soon started dating, and quickly got serious. Today Allison is stepmom to Jeff’s four kids: Matthew, 35, Julia Claire, 23, Silvia, 21, and Parker 17.

His advice to a complaining passenger on one of his flights pretty much sums up Jeff’s philosophy of life:

“Look around you. If you think you got it so bad, you might consider that I’m going to strap you into that chair and we’re going to go 600 miles per hour through the sky, seven miles above the earth, and in a few hours I’m going to deliver you safely to a destination that would have taken months in a covered wagon. We get on a plane and we fly at will. Look out that window! Don’t roll your shade down.”

It’s obvious that Jeff won’t be rolling his shade down anytime soon.